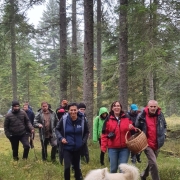 The first training within the Training Program for wildlife guides, which is realized as one of the activities of the “Hoo Hoo Project – Creation of Owl and Other Wildlife Experiences”, was held in Rožaje in the period from 08 – 10 November 2021.

Twenty-five future guides from Pljevlja, Bijelo Polje, Berane, Petnjica, Rožaje, Prijepolje, Sjenica, Tutin and Novi Pazar, gathered to learn about the biodiversity of fungi, their importance and the specifics of the community in the cross-border zone of Montenegro and Serbia.

The first day of the training was focused on the theoretical part, which included a presentation on fungi in the region, with a special emphasis on rare, endemic and endangered species. Also, other important characteristics of mushrooms were discussed at the presentation so that participants would have a better insight into what mushrooms are; how they live; what is their life strategy; where they grow; when and where to look for them; on the important role of fungi in nature; about their significance for man; about the richness of mushrooms in the world, Montenegro and Serbia; about the reasons for the richness of mushroom species in our country; on edible and poisonous species; about hallucinogenic species, about self-decomposing species, about other interesting and unusual properties of mushrooms that are important for them as future tourist guides for conducting tours about mushrooms.

The second and third days of the training were organized in the field, at two locations in the vicinity of Rožaje, the training participants had the opportunity to see where mushrooms grow, how to look for them, for each species found its characteristics, importance in nature; there was talk of edibleness, the toxicity of the species found, their life strategy was explained; there was talk of the important role of fungi in nature; about their significance for man; about the richness of fungi in these terrains.

The Hoo Hoo project aims to encourage the development of tourism based on the natural heritage of wild plant and animal species in the cross-border area between Serbia and Montenegro. 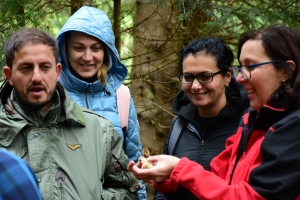 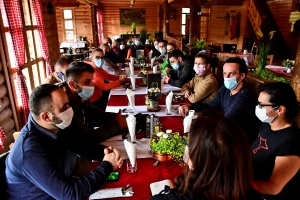 Press conference within the project ” Common Actions for Better Care ...
Scroll to top