Newsroom
You are here: Home / Newsroom / Newsroom / Events / The Opening conference of the project “Rehabilitation of illegal... 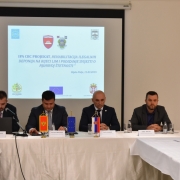 The opening conference of the project “Rehabilitation of illegal waste on the river Lim and rising awareness of its harmfulness ” was held on March 11th,2019 in Bjelo Polje. The project is co-financed by European Union under the Cross-Border Cooperation Programme Serbia–Bosnia and Hercegovina 2014-2020

At the beginning of the introductory statement the President of Bijelo Polje, Petar Smolović, pointed out that a total value of the project is €157,000, and through the project the most critical places on the Lim River will be identified, cleaned and closed. The forestation of contaminated areas will be carried out since the illegal landfills proved as an urgent issue.  At the same time permanent supervision will be performed by municipal police officers.

Deputy Prime Minister of the Municipality of Priboj, Saša Vasilić, expressed the expectation that the Municipalities Bijelo Polje and Priboj will jointly contribute to the improvement of the state of ecology, especially when the Lim River is concerned.

Further on the the conference, Jasmin Ćorović, Secretary for Rural and Sustainable Development in municipality of Bijelo Polje presented the planned activities of the project that will contribute to the protection of the Lim River and raising public awareness of the pollution of the river.

The Implementation workshop will be held on Zlatar Mountain on April 17-18,...
Scroll to top